Bob- YOU Know that Seigenthaler is Corrupt... Tired of Giving Him Blow Jobs?


"And if you want a piece of the natural gas pipeline game — heavilydependent on the environmentally suspect fracking — you can find that in Gore’s portfolio as well with Quanta Services (PWR)."  Andrew McKillop

Andrew did this article hours  after I told him that I've been upset since learning the trumped up "charges" against me in the state of Tennessee would have been dropped had I dated Al Gore...Yes it's RIDICULES  but sadly true.  Mark Silverman the former Ben Bradlee winner confirmed it.
In 2010 when I was asked if I was interested in dating Al Gore I thought it was a joke....

FYI- After the man who almost became president made "advances" to me I became a republican again & reached out to the GOP political elite. That was almost 2 years ago... Hello!!!!   I've learned that Gannett's ex but still rules the roost John Seigenthaler is a reason why my life is so miserable after I whistle blew.  That man is NOT about freedom and the 1st amendment.  He represents what's wrong with the mainstream media and I can prove it   Had he not interfered Gannett "might" have ran a story and billions of Dept. of Energy loans that are becoming "junk"  might have not been funded.

en.wikipedia.org/wiki/John_Seigenthaler
As the publisher, Seigenthaler worked with Al Gore, then a reporter, on investigative stories about Nashville city council corruption in the early 1970s.

Romney people YOU need to use the green fraud as a tool to get Mitt elected!!!!

Good News!!!   NOW that Mr. Gore has shown how "wacky' and oblivious he truly is on national TV people believe his role in covering up the NISSAN fraud. People now understand how "messed up" Tennessee is.  How I could have been abused by the courts.

beforeitsnews.com/.../andrew-mckillop-al-gores-generation​-investme...
10 hours ago - Gore's investment company files a quarterly report with the SEC that tells the story about the 30 stocks in its portfolio. His company's public claims of investments ...

Have a Great Day

It's nice having smart friends...  Thank you Andrew McKillop!!! 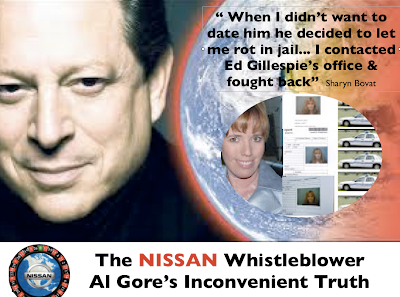